Ru is seeking to fill a non-tenure track position in nursing.

Adjuncts are encouraged to apply.

Here are the details.

A total of 984 Delegates attended the RA at the Hyatt Regency O'Hare, Rosemont, IL on April 8th and 9th.

President Kathy Griffin called the meeting to order at 9:21 a.m, our land was acknowledged by Jen Curran, and the program began. The invocation was provided by the Rev. Dr. Otis Moss III and the attendees demonstrated an appreciation of the United States Flag. The Welcome Address was given by President Kathy Griffin and the business proceeded.

Elections were held for the following positions:

Both of these candidates ran unopposed and were confirmed.

There were 8 Proposed Bylaw Amendments (PBA):

A luncheon for Higher Education Delegates was held provided by Council Chair Emerita Region 67, Beverly Stewart. Each attendee introduced themselves and we learned more about the responsibilities and networked with each other as well. 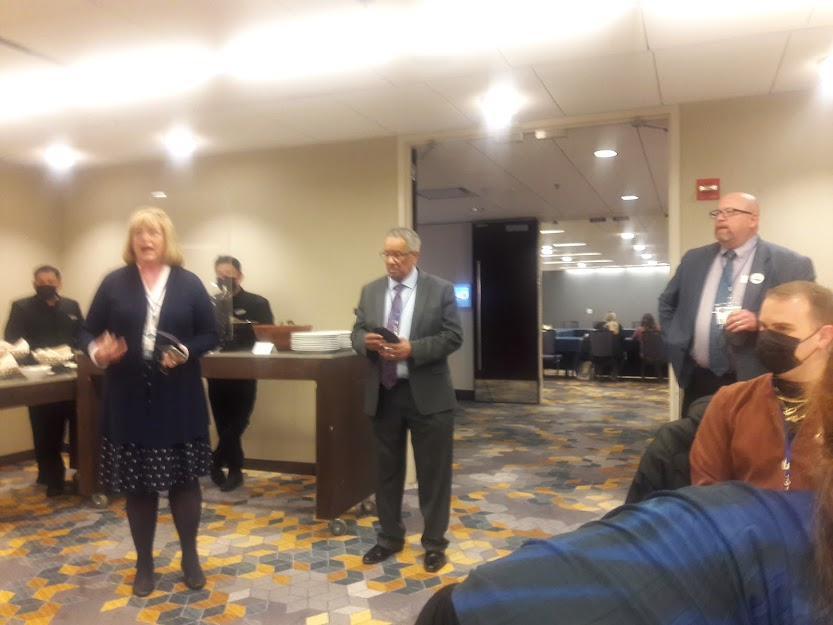 President Kathy Griffin shared her concerns about Adjunct Faculty, pointing out how this group is underpaid, overworked, hardworking, and good teachers. I shared the Adjunct Faculty Student Loan Forgiveness Bill with Frank Brooks and he is reviewing the information and was not aware that Senators Durbin, Duckworth, Hirono, and Booker had introduced the Bill.  Frank advised me that this would be a great amendment to be supported by NEA and I am waiting to hear back from him for my next steps. During the luncheon, each participant received gifts that were AMAZING, an umbrella, and a wooden utensil set along with other IEA RA Assembly paraphernalia.

The NEA this summer at McCormick Place in downtown Chicago.

Roosevelt University welcomes adjuncts to apply for the following positions.

Use this link to a page on the RU website to find more information on these positions.

Choose the Faculty tab. Then put the title of the position and department in the keywords box and also pick a date range in the box to the right.

Further information will be provided immediately below the search window.

Join your fellow adjuncts for the 2022 Spring Semester RAFO Membership Meeting, which will take place FRIDAY, APRIL 22, at 4 pm via Zoom. This is the link to join us:
https://roosevelt.zoom.us/j/96583149610

RAFO will provide updates on our meeting with President Ali and our new Provost, Andres Marak, about 2022-23 and other concerns. We will also have a guest from TIAA to pitch why you should set up a TIAA account at Roosevelt, which is one of the benefits available to you as a Bargaining Unit Member. We will talk about an in-person end-of-semester get-together, and then leave the rest open for you and any questions you have about RAFO and RU.
PLEASE COME!

Roosevelt University has announced a number of job openings that accept applications from adjuncts.

Use the link provided in each listing to get more information about the position and how to apply.

As lead negotiator for the 2020-2024 contract, I am pleased to announce that your negotiating team and Roosevelt University have come to an agreement. RAFO is extremely pleased with the final outcome and we believe you will be, too. The University was adamant on 0% for the first year, but as an offset for that 0%, we negotiated a signing bonus of $150 for each bargaining unit member that taught either in Spring 2020 or will teach in the upcoming Fall 2020 semester. That then takes us into the final three years of the contract where adjuncts will receive a 2% increase for each of those years.

As I hope you can see from the above, RAFO worked hard to ensure that you are rewarded for the professionalism and integrity all have shown during these unusual and trying times. We are attaching a copy of the final contract for you to review and eventually ratify. The areas that appear in green are changes that were made to the verbiage in the contract that will support RAFO during the upcoming 4 years.  Appendix A reflects the 2% increase for each step in the final three years.

A link with the time will be sent next week for all to join this a zoom meeting, where we can answer your questions about the contract.

In closing, we hope you will be as excited as we are regarding the new contract.

Don Wlodarski and the RAFO team:

Member of the Illinois Education Association